It's a Fair Route In

Share All sharing options for: It's a Fair Route In

"Giving Fulham a place in the Europa League next season through the Fair Play League is ridiculous...What next? Nicest-looking kit?"

As is always the case when a former player enters the foray of newspaper column-land, Lee Dixon fails to see the beauty in what he loves to call the 'beautiful game'. And he isn't the only one who has forgotten the principles on which football stands in an attempt to win over the common fan.

Every newspaper Britain-wide has attempted to fill some inches with a patronising view on how the Fair Play League is quite disproportionate to its title; an impractical and unwarranted route into European territory.

The argument is always thus: the best teams should get in, not just the 'nice teams', as Dave Kidd's daughter supposedly put it. A valid point, with it being a competition founded upon class, skill and general wonderment, but then surely we should just bypass the likes of Daugava Daugavpils of Latvia and Honka of Finland, and just allow the secondary elite to battle it out in what would more-than-likely be a four-team tournament.

However, of course, we can't do that, because it would undermine the spirit of all that is good in cup knock-out competitions. All the fun comes in the merriment of an underdog victory or a dazzling young foreign star's gallant sprint from one end of the pitch to the other, capitalised with a finely beautiful finish which would all but sign the cheque on a move to a 'proper good' club sooner or later.

Yes, having the weaker sides and their unknown players makes for truly fulfilled cinematic delusions.

But no, there's no way a side can qualify for simply playing football in the way its makers intended. And no, playing through thirty-eight brutal and highly labouring games with only one red card in return should not be rewarded.

Instead, a now Championship side and a Stoke team that finished a virtually chasm-like five places behind Fulham should get the plaudits. For they, despite being statistically inferior, 'deserved' their place. 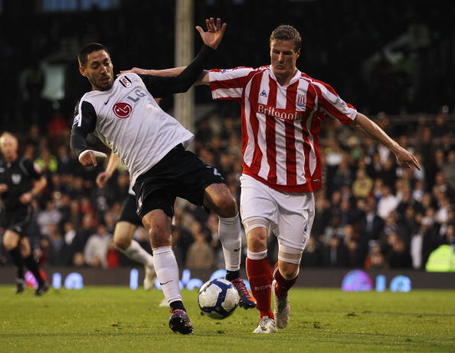 And, with the furore that surrounds football's governing body as we speak, it can only fuel the sceptics' arguments. With the Fair Play entry into Europe being the brainchild of UEFA, the same UEFA who immediately warmed to the bitterly disappointing idea of two extra officials, it only makes the prospect of our entry seem more farcical.

It's not though. That a side can be justly recompensed for a season of strict discipline and fine football makes UEFA's choice ever the more welcome to those who truly love the game and those who want it played respectfully.

Yet, we'll face the blatant jealousy of those who didn't make it and we'll always face the scrutiny of the press, whose sole aim is to please the masses; who of course didn't make it. The more that they ridicule, though, the more they ignore the quite clear ideas behind the concept: pleasing play, sound conduct, they all need rewarding otherwise no-one would abide by the rules.

Fulham have, quite consistently in fact, played with values in mind and the most we ever get in return is £50,000, which, given the manner in which we've received it, is often generously invested into non-football, community schemes. The club will rarely see a penny of it and it's about time that a team actually received a worthwhile compensation for efforts that uphold the principles of football as a whole.

That Fulham get the merit, though, is clearly what has riled many the most. Were it Blackpool, for example, people would be bending over backwards to not only praise Ian Holloway, but endorse the Fair Play League. We're not Blackpool, however, we are Fulham, a team that practically finished a whole division above Birmingham in the end and outlasted the guile of Stoke City.

Despite our quite palpably rock-solid standing as one of England's best representatives though, it seems we are not wanted. Perhaps England needs reminding of just what we're capable of given a European run, then.