Why Hughes is better off at the Cottage

Share All sharing options for: Why Hughes is better off at the Cottage

It was only a matter of weeks into his new Craven Cottage reign before other clubs began to court Mark Hughes; notably Aston Villa. It epitomises the state of today's game that a team can consider it reasonable to set their sites on a manager so fresh into his job that he would struggle to name the secretary whom he would greet on a daily basis.

It didn't stop Randy Lerner and his henchmen at the time though, and only 11 or so months on, it won't stop them again. It's become quite clear that Aston Villa would like Mark Hughes to replace outgoing manager Gerard Houllier and executives at the Midlands club have hardly made an attempt to quash such rumours. So, one must assume there is a solid foundation in the paper talk. After all, no new contract has been agreed and in the days of FIFA corruption, £50 million signings and fines for praising officials, 1 year seems a long time to hold down a managerial post.

Hughes would be sensible to hold out  a little longer than that, though.

Aston Villa, despite their indubitably decent credentials over previous years, cannot, with genuine authenticity, be considered a club on the up. At one time, it must be said, they were. Under O'Neill's tutorship they almost became the untouchables of non-top-four football. While they didn't play with the fine, flowing football of the best of them, they fought season-upon season and Villa became, before long, widely renowned as one of the best challengers to the top four's stronghold that the Premier League could boast.

Even before O'Neill's tumultuous stint came to an abrupt end, however, their prosperity began to dwindle. Tottenham Hotspur, under the guidance of Harry Redknapp, showed that it wasn't all that difficult to attain Champions League football after all, and it became clear that, regardless of abundant consistency, Aston Villa were missing something to make them a truly enriching club of modern times. 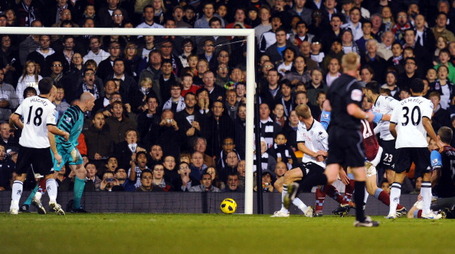 Things took an even greater turn for the worse when Martin O'Neill left, though, and the bitterness of his departure underlined certain rumblings that were prevalent at the club. Couple that with a moderate opening season for Gerard Houllier and you have yourself a team in the midst of a great demise. Ninth place might look okay on a CV but it didn't tell the whole story.

And, with Houllier supposedly on the way out, it would make room for a third manager in only a year; hardly the sign of a stable club, even if none of the aforementioned departures were sackings. Yet Houllier, seemingly, isn't the only one to be quitting the Midlands following a lackluster campaign. England internationals Ashley Young and Stewart Downing have made it quite palpable that they'd prefer to ply their trade in European competition rather than taking a stab at the odd Carling Cup run alongside a tedious Premier League season next year.

It's all falling apart for Aston Villa then, and yet Hughes is seemingly up for the job?

It's perhaps plausible to understand some sort of brain process which would lead to Aston Villa having more potential than his current Fulham side. They have the recent pedigree and they have the financial backing; but don't Fulham have all of that too?

We are, almost begrudgingly by default as it goes, back into European competition. Back home, almost, given our mighty run in the 2009/10 season which saw us pipped in the final minute against a clearly fledging Ateltico Madrid side. Having the extra cup to compete in, an extra dimension to our dynamics, is invaluable to a club our size and it's something Villa can't offer. Of course, our exploits could be short lived, but if you go by recent evidence then, clearly, we have it in us to take great strides against Europe's elite.

Mohammed Al Fayed is hardly short of money, either. That his fortune is considered less than that of Randy Lerner is almost irrelevant, given his fanatical devotion to the club he has always loved. While sides around us are being bought for business reasons solely, we continue to be funded by someone who always has, and always will, have the best interests of Fulham FC at heart. He's extravagant and sometimes nonchalant, but he's one of the best chairman we could have ever asked for. Aston Villa's equivalent doesn't quite live up to those standards; look at where O'Neill is now.

And, with Fulham, you get a sense that the fans aren't constantly on your back. We want success and we want to move forward but we're aware of our limits and we know where to draw the line. In contrast, the fans of the Midlands side may be prone to the odd nag and he'll find far more pressure on his shoulders than he ever will do by the banks of the Thames.

That makes for far more room for success in London than in Birmingham. Fulham are, finally, a team that can attract the lucrative players, play the most entertaining of football and appease the most humble of fans. So, before Hughes sets himself up on a road of one year stints at average sides, perhaps he should settle for his mantra of old and slog it out while he's still successful. After all, if it ain't broke, don't fix it.