Share All sharing options for: Even if we win, nothing will match 2009/10

That we continue to prosper as a fledging and borderline-successful club without the subsequent adage of silverware to our name is quite beyond the game's best economists. You could easily argue that financial backing from an elaborate and provocative Egyptian could provide the answer, but more underlines our consistent high standard.

The expectations of the polished and refined fans, of whom most have seen Fulham in the deepest of seemingly inescapable apertures (take the 95/96 season as an epitome of depression), continue to provide workable foundations upon which Mohammed Al Fayed and the club can effortlessly build upon. We've never assumed ourselves worthy of league titles or cups and yet we rarely lack the faith of the common or garden football fan. Bi-weekly, the fans of the Hammersmith End can be heard to chant the expected cries of support, but on few occasions do they lash out the diatribe on offer at other hosts.

This sinless encouragement and the fluctuating levels of confidence in our own side's ability will make the Europa League journey of 2009/10, regardless of its bitter ending, a piece of folklore most difficult to surpass.

We entered into Europe, entirely willingly and full of youthful exuberance, in the early Summer of 2009. There were few presumptions of success in those preliminary stages, merely excuses to enjoy all that our continent had to offer. A trip to Vilnius and a tie against Amkar Perm provided meek victories with similar aplomb, yet, they opened new doors which led to new corridors for travelling fans, whom had only the Inter-Toto Cup to speak of in corresponding fashion. The meagre FK Vetra facilities and the hostile Russian welcome may have been dampening to the untrained eye but were really the source of unforgettable evenings and, eventually, a memorable journey that others will envy for years to come.

If hope was already dwindling, however, the group stages did little to get us excited. Hodgson, the watchful eye over one of our greatest ever campaigns, palpably felt that the Premier League had growing importance and Europe took a seat on the bench, alongside Eddie Johnson. Moments of sheer magic and wondrous entertainment may have become prevalent, especially against Roma, but we paid our naive commupance in the end, and a result against one of Europe's most prized possessions was never forthcoming. A draw against CSKA Sofia and a lackluster home win over Basel did little for the imaginations either.

It took, quite ironically in fact, given the away Premier League form which marred a 12th place finish, a trip to Basel to truly grip the fans, but the nation was yet to follow. Hodgon's men needed a win and duly delivered, although cutting it fine with a 3-2 victory in Switzerland.

Target man Bobby Zamora provided the inspiration which finally allowed the masses to sit up and take notice. We'd been dealt a difficult tie in Shakhtar Donetsk, the UEFA Cup holders, and the Fulhamish attitude of the fans kicked in when the Ukranians pegged us back in the home tie. The number 25, however, stepped up in the most emphatic of fashions and blasted us into a round of 16 tie of our dreams, or more realistically, our nightmares.

It was only in that round of 16, facing the most uphill of tasks with the most condescending of deficits, though, that belief finally entered the vocabulary of those seated at Craven Cottage on 18th March 2010. Juventus, the self-confessed giants of not just European football, but world football, fought themselves to a cosy 4-1 aggregate lead in the opening minutes of one of Fulham's greatest nights. David Trezeguet wound back the years and leapt up from the floor, in only the way a feigned injury could have coaxed, to add to the Italian's first leg victory. Yet, optimism was to most surprisingly follow; a red card advocated our strenuous passage into the quarter finals and the Fulham faithful never looked back. Clint Dempsey had provided us, so perfectly and so exquisitely, with a reason to believe and a reason to nail our colours to the proverbial continental mast. We had become a side to be entirely wary of. 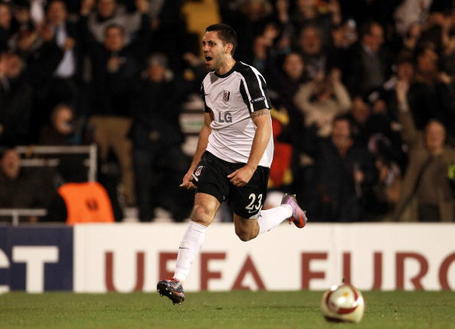 Wolfsburg were surpassed with such constraint and inadvertent ease that to recall the details would be difficult. Nevertheless, the progress was remarkable and the escalation in class and familiarity became a trademark of the season. Hamburg followed and made way for one of the sternest tests the Craven Cottage outfit have overcome; the deafening roars of the crowd after the victory and the permanently resonating words of a startlingly indulging ITV commentary perfectly encapsulating an evening of such revelry and merriment that to have been in the stands would have paralleled any marriage or any lottery win: "What an achievement for Roy Hodgson. What an extraordinary achievement for Fulham. A level of success that this lovable, once quaint club, could never previously have dreamed of."

A major European final beckoned, thanks in so small part to Simon Davies mastery of the ball, but such a joyous occasion could never be relived. Atletico Madrid proved too strong for Fulham and a season so extensively fun was finalised in such a deflating manner.

No matter, though, as we had the time of our lives. Fulham were fresh, unique and stimulating and we had proven our point to Europe. We had enjoyed the opportunity, and unlike most, persisted to the greatest of extents. We didn't let the chance idly pass us by and we are the better for it.

A new adventure, though, would never match up to our former flourishes, even if the ending can be rectified. Wins will appear outdated and jubilation will feel second hand. It's not to say we shouldn't progress, it's just to say that our memories should be cherished and not replaced.

Perhaps, then, with this previous experience behind us, we have a greater chance of returning to SW6, trophy in hand. But to assume a run of this calibre would yield such emotion, such footballing competence and such 'disbelieving joy' as yesteryear, would be purely wishful thinking.