A Belated Tribute To Roger Brown And A Bygone Era At Fulham F.C.

Share All sharing options for: A Belated Tribute To Roger Brown And A Bygone Era At Fulham F.C.

I was driving through Oklahoma when I learned that Roger Brown had died. It came from one tweet, then two and so on. A statement of condolence was released by Fulham paying tribute to the retired center back, a man who died far too young at 58.

I don't really have any memories of Brown, be they fond or otherwise. You can attribute this to the fact that I've followed Fulham for less than a decade or to the other considerable fact that when Brown left Fulham for Bournemouth in December 1983 I was barely six months old.

Yet, while I may not have had any memories of him to call my own, I can credit Brown, or rather a photograph of Brown, for helping me cobble together a visceral vision of what soccer once was in England.

We're going back now to the early 1980s, 1982 to be precise, when things weren't as they currently are for Fulham. Some things, at least. The mighty, mighty Whites played at the Craven Cottage, as they had and have since 1896. They still wore white shirts and black shorts at home, as has been done each season since the club's inception. Well, every year except for the current one.

But the current era of top flight stability was a pipe dream in the 80s. Historically typical as it was, Fulham was toiling in the third division of English football (think League One today), a "yo-yo" club to the core. One of the top sides in the third tier, but not one that could be considered dominant.

In this era, the top three teams in the third division were allowed promotion to the second. No playoff system was in place. On the last day of the season, Fulham sat in third place with 76 points. A point behind them sat Lincoln City.

As fate would have it, Fulham hosted Lincoln City on the final day of the season.

Martin Plumb, author of several books on the history of Fulham, attended the match:

The Lincoln game was totally Fulhamish - and from a position of automatic promotion Fulham had contrived to make us sweat until the last day (or night) of the season.

In a match of fate, the original game had been postponed due to bad weather around January or February, the fixture computer had lined these two up for the final evening. Two were already promoted by that time, which left Fulham in third place and Lincoln in fourth. Fulham needed JUST a draw (always dangerous) whilst Lincoln needed the win to take that coveted promotion place.

The weather was awful and play itself was thoroughly tedious, according to Martin. If the carrot of promotion and threat of non-promotion were not on display, a nap may have been required to pace oneself that evening. But, as the highest of stakes were up for grabs, nervous fans with nervous stomachs created an "electric" atmosphere within the filled stands of the Craven Cottage. The nervy atmosphere seemingly descended onto the field itself, leading to an ugly match where crunching tackles were more likely than strung-together passes and moments of flair.

It was Brown's 12th goal of the season, an astounding number for a central defender and still a record at Fulham. It looked to be the goal that would not only to secure promotion for Fulham, but the one that could perhaps capture a third division championship as well.

Realising it was do or die, ten-man Lincoln finally came out and bombarded the Fulham goal. The equalizer was scored on 72 minutes by the unlikeliest player, full back David Carr. Sensing they had a chance, Lincoln threw everything at Fulham in the final ten minutes - which seemed to go on forever. They could have won it too but for Les Strong's goal-line clearance in the last few minutes.

Finally it was over at 1-1 and MacDonald's side were promoted - but everyone was completely drained.

Isn't that right at the heart of life as a supporter? Ultimate success followed by complete emotional exhaustion?

One of the Fulham's most iconic images was captured that night by Ken Coton, a longtime photographer for the club and a lifelong Fulham fan. 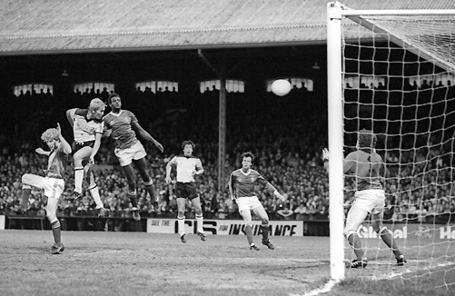 Brown in full flight, his head sending the ball forward hard and accurate. David Felgate is only able to get a hand upon a whisper of the ball, not enough to dissuade it from its final destination. Success.

For as memorable as the image became, another picture Coton took of Brown that night stood out even further to me. 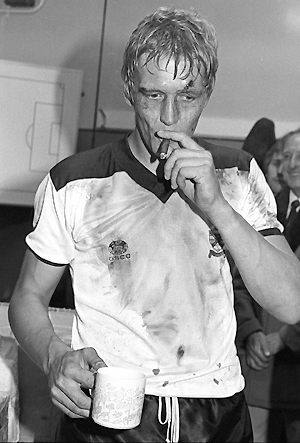 In the dressing room following the triumphant draw, Brown, still covered in sweat and mud, takes a moment to enjoy a celebratory smoke and presumably a cup of tea. It all seems so natural, not only for that time, but, in a way, for modern times as well.

I can just see my friends and I doing this after a recreational game, stopping at the pub (not just some random bar, there can be only one) for a pint and a smoke before heading home. Just enjoying the post-match afterglow and reflecting on a job well done, no need to worry about anything else in the world.

It just all seems so far removed from the modern professional athlete and that's probably what made it so profound to me. It's a picture that, upon seeing it for the first time, immediately lodged itself into my memory. It's this image along with books like the Damned Utd. and films like, well, the Damned Utd. that painted a picture of sport in a far away country during a bygone era that I often strive to imagine.

So thank you Roger. Thank you for leading Fulham to a success that will never be forgotten. Thank you for the many memories you created during your relatively brief tenure at the Craven Cottage. And thank you for inadvertently allowing my imagination to thrive by simply being yourself. 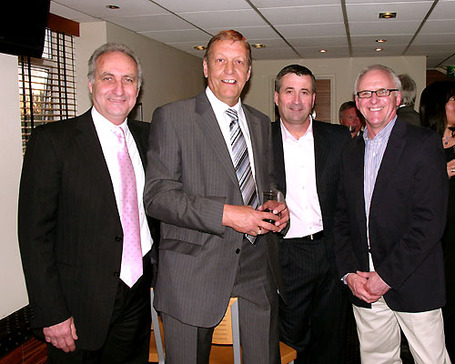 All photos, aside from the header, were provided freely by Ashwater Press and captured via the photographic talents of Ken Coton. Ashwater is owned and operated by Ken and Martin Plumb and has self -published a treasure trove of books dealing with the rich history of Fulham FC. I highly encourage you to check out their website and and support their efforts by purchasing one of the many books they have to offer.