On the 31st of August 2007, Daniel Ben Murphy – Danny – put pen to paper on a one-year deal at Fulham Football Club. Little did anyone know that during Danny’s 5-year stint he would be our backbone from the brink of relegation from the Premier League to the cusp of European Glory.

Murphy started his career as a rip-roaring youngster in a Crewe Alexandra side managed by the iconic Dario Gradi in 1993. Always admired for his football brain, Murphy was played as a deep lying forward, scoring 27 goals in a distinguished four-year spell at Gresty Road. In 1997 Murphy was signed by then Liverpool boss, Roy Evans. Murphy enjoyed both domestic and European success in his 7 years at Anfield. He was a pivotal part in perhaps what was the most successful Liverpool team of modern times, which included a cup treble that was as unique as it was brilliant. His success in Liverpool’s side during the 2000/2 campaigns produced a call up to the England World Cup squad, only for Murphy to break his foot in the build up to the event. From then on Murphy had spells at Charlton Athletic and Tottenham Hotspur – before ending up at Craven Cottage.

The Craven Cottage turf has been played on by some footballing legends – Johnny Haynes, Bobby Robson, George Best, Pele and Ronaldinho – and now you can add Danny Murphy to that list. Never has the Cottage beared witness to a man whose passing technique was astute as Danny’s. He could split a world-class defence with one pass. A born leader, Danny was the backbone of the most successful Fulham team in recent history, his passion on and off the pitch summed up the make up of the man. During our ‘Great Escape’ to our Europa League run in 2010, Danny summed up the mentality of Fulham. Not only did he score the goal that assured Fulham’s Premier League survival, but also the pass to the goal that spurred Fulham on to a semi-final win over HSV Hamburg.

If there was ever a time to stand up and be counted, Murphy would be the first to rise to his feet and spur his teammates on. His gritty, determined, never say die demeanour epitomised the fight in Fulham. Historic wins over Manchester United, Chelsea and Juventus all materialised under Danny’s orchestration as well as fantastic wins over the likes of QPR, Arsenal and Tottenham. Danny was the main cog in the well-oiled Fulham machine, he made us tick, his recycling of the ball was always on point – as well as his ball retention. A trademark dip in the shoulder to let the ball come across his body never failed to fool opponents and delight the crowd alike.

The title ‘Captain Fantastic’ is much deserved. Passion, determination and utter professionalism on and off the pitch meant that not only Fulham fans idolise Papa Murph, as he is affectionately known by us Whites. A true gentleman and Mr Fulham. His 5 years at Fulham will go down in history and his legacy will live on forever.

On behalf of every Fulham supporter across the World - Thank you, Danny. 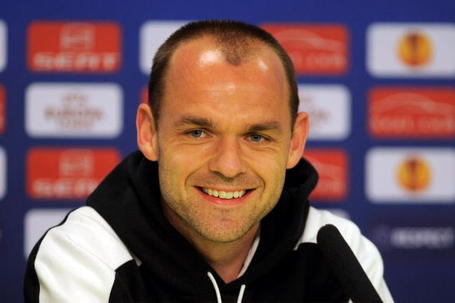