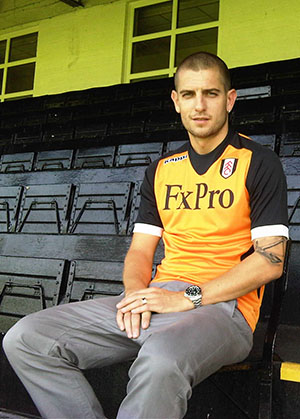 On the 28th of June 2012 Fulham Football Club formally announced the signing of Mladen Petric, a 31 year old Croatian international. Some of you may be asking who? Some of you may already be familiar with Petric – mainly for his wonderful free-kick that he scored against Fulham in the semi-final of the Europa League in 2010.

Petric’s upbringing is similar to our very own Pajtim Kasami – born on New Years Day 1981 in Dubrave, at that time part of SFR Yugoslavia – before moving to Switzerland as a young boy. Petric holds Swiss citizenship and amassed a number of appearances in the Swiss League for Baden Baden, GCZ Grasshopper and FC Basel. Petric started his career at Grasshopper Club Zurich and in 200 appearances in the Swiss Axpo League Petric scored 72 goals, he finished as the leagues topscorer for FC Basel in 2006-7 with 19 goals – earning himself a move to the Bundesliga with Borussia Dortmund for an undisclosed fee.

Initially, Mladen was played out of position by Dortmund as the head of a diamond in a 4-1-2-1-2 formation, sitting behind the strikers in a deep lying forwards position – used as a creator for the two strikers. Quickly it was realised that his most effective position was as a striker, and predominantly with Dortmund he was played up front with a partner. Petric had a fine first season as was one of the leagues top scorers, popping up with assists and goals in big games for instance in the final of the German Cup against Bayern Munich. After two seasons, 29 appearances and 13 goals he was transferred to Martin Jol’s Hamburger SV.

Petric’s arrival at Hamburger SV meant that fellow striker Mohamed Zidan was transferred to Dortmund. Petric continued his trait of producing big games, scoring all 4 goals in Hamburgers two-legged German Cup win over Bochum as well as a picturesque free-kick in the semi-final of the Europa League, which Hamburg went on to lose to Fulham. In 98 appearances for Hamburg, Mladen scored 38 goals.

The new Fulham signing is an established international for Croatia, making 44 appearances and scoring 12 goals – including 4 goals against Andorra in Euro 2008 qualifying. Petric also appeared for Croatia at Euro 2008 in the team that was knocked out by Turkey on penalties. 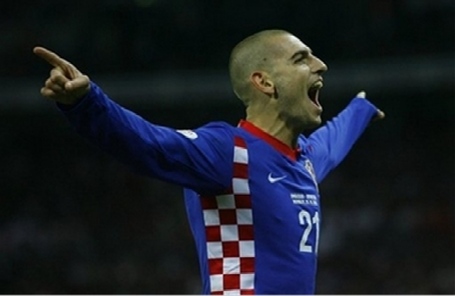 Petric is 6 ft 1 and left footed – well known for his set piece ability but also for his ability in the air. Whilst Petric is not the fastest player his ball control is superb, his strength and athleticism means he has no problem playing as a lone striker or as a pair. Petric, whilst being is tall is also acrobatic – scoring bicycle and overhead kicks in his time at Hamburg. He possesses a powerful left foot and is capable of shooting from range and has a good volleying technique. He has a good range of passing and a great ability to retain the ball.

Hopefully this short post tells you a bit more about Mladen and what we should expect from him in the coming season.