Perfect opportunity to end the blues - Wigan (a) preview

Share All sharing options for: Perfect opportunity to end the blues - Wigan (a) preview

And so the quest does continue. That infamous and special breed - the first away victory. Last time out, it came at Wigan Athletic, with a drab, tepid display rewarded with two goals and a clean sheet. I think most would take that again, given our last away outing was a particularly damning 3-0 defeat at West Ham United.

If form is anything to go by, you would expect this encounter to fall somewhere between that 3-0 defeat and our 5-0 opening day win against Norwich City - it will be both adventurous but, probably, at moments, frustrating. This is because, it seems, no matter who the opposition, there is some sort of mental block in the Fulham works that restricts aptitude outside of SW6.

Wigan, though, who we meet on Saturday, present a good opportunity for Martin Jol. They play a distinct brand of attacking football that, while being pleasant to watch, by no means ensures defensive solidity. Such problems have led to many relegation concerns over the past few seasons but, to the Latics' credit - and to Roberto Martinez too - they have avoided demotion with displays of doggedness and, in the same breath, attractive play.

Jol will be keen to exploit the frailties that have become evident but the home side have a had a respectable start to the campaign. They're 14th in the table with 4 points, having defeated Southampton and drawing with Stoke City. Their last outing, however, left a more sour taste after being trounced 4-0 by Manchester United.

Fulham travel as a slightly more upbeat party after putting an end to a run of three consecutive competitive defeat in all competitions. Dimitar Berbatov was hugely influential as Steve Clarke's West Bromwich Albion were beaten 3-0.

As mentioned, goals from Clint Dempsey and Moussa Dembele gave Fulham a 2-0 win in the same fixture last season, while, in the Craven Cottage tie, Pavel Pogrebnyak and Philippe Senderos helped Fulham to a 2-1 victory.

Antolin Alcaraz is the only fitness concern for Roberto Martinez, as the defender is carrying a groin injury.

Bryan Ruiz and Mladen Petric will gratefully return to the fray, with Jol set to make a decision on whether to start with Wigan old boy Hugo Rodallega or to revert back to the pre-injury eleven that included Ruiz in the role behind the striker. Mahamadou Diarra, still to hear on the severity of his knee complaint, will miss out and so to will Kieran Richardson, Kerim Frei and Philippe Senderos. 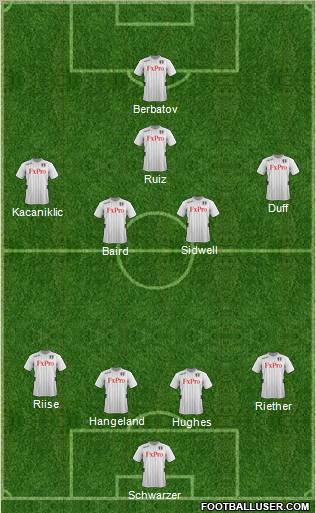