We may be back to the sanctity of Craven Cottage but the positives, ahead of this weekend, just about stop there. We face Manchester City, champions of England, and they are, at present, a wounded animal keen on getting their season going.

Nonetheless, we actually have a decent track record against City, our most memorable recent performance coming in 2008 at Eastlands, where Roy Hodgson oversaw a dramatic turnaround from 2-0 down to 3-2 up. At half time in that game, Fulham were mathematically relegated.

And we've come a long way since then - so far, in fact, that I can bemoan the absence of someone so talented as Berbatov. This tie will prove particularly difficult without his sheer finesse at the head of the pitch but, we've done it before and we can probably do it again.

Mancini enters this game with his side below Fulham in the table after a poor start to the season which has seen only two Premier League victories, both at home against relegation candidates in Southampton and Queens Park Rangers.

Most recently, they fell to a surprising 4-2 defeat at home to Aston Villa in the Carling Cup and City will be particularly keen to put that behind them on Saturday.

Fulham, meanwhile, are enjoying their best start since 2002 and morale in the camp is high. If Jol does somehow outwit his counterpart and grab three points, it would be Fulham's third win in a row after a convincing 3-0 defeat of West Bromwich Albion and a dogged display as Wigan Athletic were beaten 2-1 at the DW Stadium.

Just over a year ago, Fulham fought from 2-0 down to take a 2-2 draw at Craven Cottage in the same fixture with Bobby Zamora scoring for the home side. In the reverse tie, City won 3-0.

Mancini will travel without Jack Rodwell who has a groin complaint, but Samir Nasri has returned to fitness and could feature.

For Fulham, Diarra's injury news isn't as bad as first feared and he will only be sidelined for four weeks. Berbatov, of course, won't play a part but Kerim Frei has returned to the fray. Philippe Senderos, Ashkan Dejagah and Kieron Richardson are all back in training but are unlikely to be given starting berths. 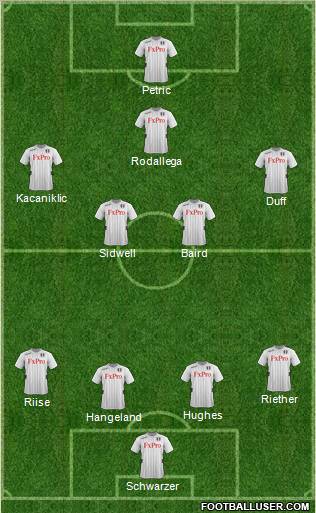