Martin Jol rolled out the same formation against Liverpool recently picked apart by Southampton, Leicester City, and Manchester United and the result was predictable. Why it's time for Martin Jol to go.

I've decided to write this rather than go hunting through my fiancee's jewelry box to find a broach and gouge my eyes out Oedipus Rex style, such was the utter incompetence of Fulham's display against Liverpool today.

If you watched the match on television or were hated by God enough to have endured the 4-0 drubbing live and in person at Anfield, you hardly need statistics to help you understand just how bad/awful/inept/insipid/atrocious/abominable/dreadful/lousy/beastly Fulham were, but in case you really weren't sure, here they are.

Liverpool had 32 attempts on goal to Fulham's 4.

Liverpool completed 210 passes in the attacking third to Fulham's 54.

Without Stekelenburg's 6 saves and a few fluffed shots from Liverpool, this match could easily have ended 6 or 7 to nothing.

Martin Jol ran out essentially the same side that was destroyed against Manchester United last weekend, and the same issues were immediately apparent. Steve Sidwell and Scott Parker were asked to cover every inch of the Anfield pitch and Liverpool's pressing game quickly overran them.

Consider the screenshot below. Parker and Sidwell both get caught going to the same ball as the back four are forced to retreat with Liverpool attacking players running free into the box. Coutinho eventually played this ball square to Steven Gerrard who found Luis Suarez with a one touch pass. Liverpool were immediately in but unlucky not to score. 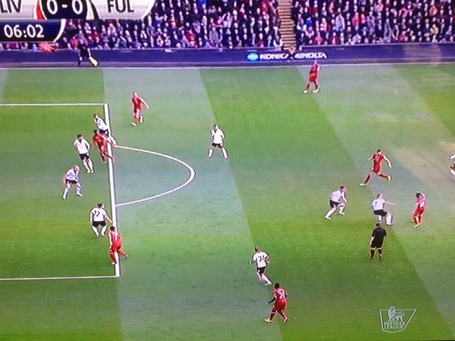 This pattern continued throughout the match, but was compounded by a number of factors. Take note of how far infield Alexander Kacaniklic has come. He can be seen in the above image on top of the Fulham penalty box nearly in the center of the pitch. He's trying to pinch in to help Sidwell and Parker who were over-matched for the entire 90 minutes. As he continued to do so, Liverpool started to find Jordan Henderson and an overlapping Glen Johnson. There were numerous occasions in the first half in which Johnson in particular received the ball between the Fulham box and the touchline without a Fulham player within 15 yards of him. A full 46% of Liverpool's attacking play came down the Fulham left flank. If he doesn't pinch in, the central midfield is dissected. If he does, the flank space is wide open. Damned if he does, damned if he doesn't.

Jol pulled off Kacaniklic for Bryan Ruiz at half time, which seemed harsh and incredibly obtuse. Someone said we have a guy named Derek Boateng in the squad?

In the second half, Liverpool's pressing game went into overdrive and Fulham were unable even to play out of their own half. Ruiz played more central than did Kacaniklic and when Kieran Richardson, Elsad Zverotic, and later Aaron Hughes received the ball, they were forced inside by the Liverpool wide midfield players and outside backs. With no one wide, their only outlets were Parker and Sidwell or a long ball to the incredibly isolated Dimitar Berbatov.

Wanting to keep possession rather than hoof it up the field, Parker and Sidwell often received the ball under pressure, got caught in possession, and then were well out of position having been in the middle of transitioning to attack. The below image is from the second half shortly after Sidwell received a ball under pressure and then was dispossessed by Luis Suarez. Jailbreak. 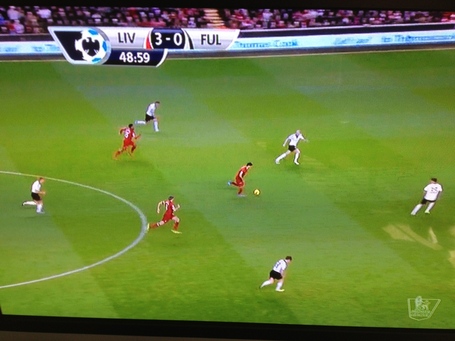 These are just two examples of particularly obvious patterns of play that eviscerated Fulham on the day. I didn't get any screenshots of the two set piece goals mostly because I was screaming at my television and fending off the deluge of caustic Tweets wondering how on earth a Premier League team could be so wholly incapable of making any progress toward rectifying its most naked deficiencies.

There was one new development in this match and for me, it has to be the final nail in Martin Jol's coffin. The players were stunned. They looked to be playing under water. Rather than the second half fight of last weekend, hopeless though it was, Fulham clearly just wanted the beating to be over. Dimitar Berbatov, upon being subbed, walked off the pitch like a zombie. At the final whistle, cameras caught the Fulham players shuffling around punch drunk, mouths half open and with a 1,000 yard stare.

I've hinted at it and been critical of Jol all season given his tactical blind spots and inability to revitalize what used to be a miserly defensive unit, but when the players stop fighting, it's time for the manager to go.