Just a few pre-match thoughts before the Cottagers take the pitch against the Canaries.

1) Norwich City is a very good club on the Counter Attack, Fulham not so good with defending the counter attack. 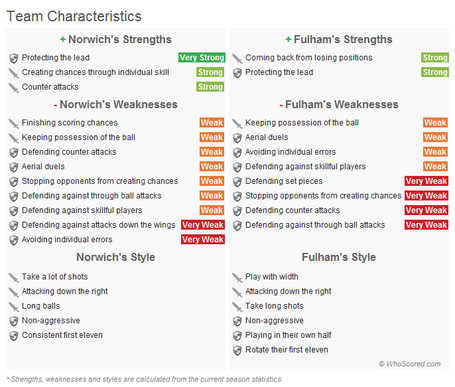 While Norwich only has a single goal scored on a "fastbreak", according to Opta definitions, that doesn't mean that they don't create shots in those situations. In fact creating a number of shots with specific emphasis is something that their known for according to their WhoScored characteristics.

That leads us into the next point.

2) Health is a central narrative in this story. Two successful returns from Cities intrigual pieces in both Robert Snodgrass and Ricky van Wolfswinkel. While our Fulham boys have Philippe Senderos doubtful and Dimitar Berbatov will be a late decision based upon the results of a fit test prior to the match.

Gaining Robert Snodgrass back from his injury is huge for the Canaries. His passes have directly contributed to 27 shots the most by any player from either team and good for 10th in all the Premier League. He's done this despite playing less minutes than all but one peer on that top-10 list.

The once-targeted Man United striker, van Wolfswinkel is returning from a "prolonged toe muscle" injury, whatever that means. The former Sporting Lisbon striker joined the canaries this past summer on £8.5 million transfer fee, yet most fans feel they have yet to see him live up to any of that potential in the 600 minutes that have been afforded him by Manager Chris Hughton.That said it's been widely speculated that he will see the pitch today during the match.

3) A lot of credence is being put into past records, Norwich with their home record and Fulham with their recent Premier League record against their weekend foes. Neither of these stats are what you might call "good" indicators of future success.

I could really care less about what Norwich did with Paul Lambert at the start of last year against Everton. That doesn't tell me anything about what they're going to do no or how now Manager Chris Hughton might deploy his tactics. It's all a bunch of rubbish.

Likewise, it doesn't matter that Fulham has 6 clean sheets in their last 8 matches against Norwich. Mark Schwarzer was in goal during those matches and while the defense may have a few pieces both teams function incredible different.There is also the fact that it doesn't tell us anything about the shot creation, where those shots might have been from or how often a player is likely to score.

All that said, I'm not sure how much you can really take away from either clubs recent form as an indicator on how they may perform as both have been through so much transition between personnel changes for Norwhich and "personnel changes" for Fulham.

In Summation: I'm tentative about getting a result today and I think that's alright. Fulham doesn't have to get 3 points today to not get relegated. This is a marathon not a sprint and don't let anyone tell you that todays game is going to define the rest of the season.

I'm not against getting an important 3 points on the road, I'm just realistic about going into someone elses house and thinking we're just going to be able to boss them around for 90 minutes. Today is going to be a fight and Fulham is well equipped to pull 3 points.

But football is a funny thing and if there is anything we've learned in recent matches is that good performances aren't always rewarded with the right outcome and points to add to your tab at the end of the day. The boys need a point and if they can procure that it will be a good start. The Whites have Hull City this weekend back at Craven Cottage and that's a much more important match to have points from than this.

I call a 1-1 draw between the clubs with a random guess that it will go to Pajtim Kasami as I expect him to be another outstanding source of energy today. Anyone else have some pre-match thoughts?