With the transfer window set to open, and some holes in the squad left to fill, now is a good time to look at where the team stands.

The problem with trying to come up with a depth chart is that I'm still not sure what kind of system Martin Jol favors. In his time at Tottenham, he played mostly a 4-4-2. With Ajax, he shifted to using a 4-3-3. On his return to the Premiere League with Fulham, he began using a 4-4-2 again; but that seemed to be because of the personnel he inherited. Soon enough he was using more of a 4-2-3-1. Last season began with a 4-2-3-1, but after the loss of Dembele and the injury to Diarra; the 4-4-1-1 was brought out. There were even times when Fulham lined up in a 4-4-2 diamond midfield. All of this shows that Jol is pretty flexible tactically. However, it makes trying to decide on a depth chart a little bit harder.

My guess is that Jol's preference is a 4-3-3 or a 4-2-3-1. That seems to be what he's trying to implement, with the other formations as fall backs when he can't get the personnel to work right. So with that in mind, here is the current squad lined up in those two formations. 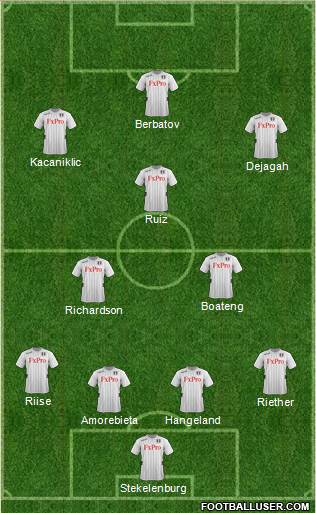 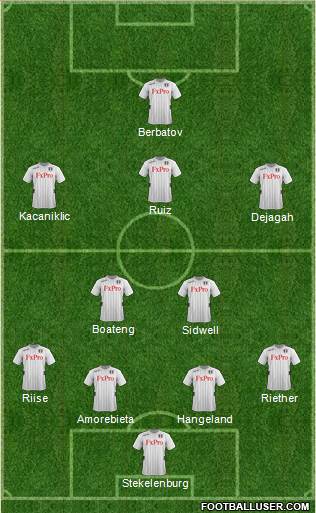 Fulham appear to be pretty set in goal. Maarten Stekelenburg looks to be a fine first team keeper, David Stockdale is a more than adequate backup, and Neil Etheridge is still there to provide depth. Problems are going to occur however if Stockdale feels the need to gain first team playing time. Fulham could loan him out once again and recall him if there happens to be an injury to Stekelenburg, just as they did when Schwarzer was the number one. The question is if Stockdale will be happy with that scenario.

This is the one area I think the depth is pretty clear on. Amorebieta and Hangeland are going to be the first choice center back pairing. With Senderos and Hughes fighting to see who's number three and four. John Arne Riise at this point is probably the first choice at left back. Both Kieran Richardson and Matthew Briggs can also play the position, but Jol has said repeatedly that he sees both at left side midfielders in a 4-3-3. On the right, there is Sascha Riether. Behind Riether there is a big empty space. I suppose Jack Grimmer is currently the backup, but I think most would agree that Fulham could strengthen the squad there.

This is where Fulham's depth is really in trouble. In a 4-2-3-1 using a double pivot, there are currently only two players for the two positions: Steve Sidwell and Derek Boateng. Which leads me to believe that we're more likely to see a true 4-3-3 with Briggs or Richardson on the left side, and Sidwell and Boateng on the right. There's also still a chance that Pajtim Kasami can play here as well.

Here we finally get to a position of strength for Fulham. The first choice CAM has to currently be Bryan Ruiz. There were rumors that the team soured on him last season, but the preseason trip to Costa Rica has put those all that to rest. But even if Ruiz were out, the list of players who could fit in that position is long. Ashkan Dejagh, Kerim Frei, and Kasami would all work very well here. And in a pinch I'm sure Alex Kacaniklic or Dimitar Berbatov could handle it as well. On the wings, Fulham is even more stacked. The left wing depth chart is probably something like Kacaniklic, Frei, Dejagh, Damian Duff, Mesca, Hugo Rodallega, Richardson, Ruiz. On the right, you've got Dejagh, Duff, Ruiz, Mesca, Kasami. The hardest part is going to be figuring out which players to play and how to get them to work together.

Now we're back to an area of low depth. Of course Berbatov is the top of the depth chart, and he is going to start every game he's healthy for. However, we've seen that he may be even more dangerous slightly underneath a more target forward; playing as a high attacking midfielder. Plus he's not getting any younger, and you can't expect him to always be available for 30+ games. The problem is that the only other two forwards on the team are Rodallega and Marcello Trotta. This has me worried.

A decision has to be made about the future of Stockdale. If he's willing to be loaned out one more time, I'd go ahead and do that and put off the decision until next season. If he's not willing or unhappy with that scenario, it's probably time to sell. I don't believe the team should be comfortable with Etheridge as the number two keeper, so a search for a veteran who is happy to be a backup would have to begin.

Not that much needs to be done to the defense. I would ideally like the team to decide if Briggs has a future at left back. If he does, I'd like to see him get some rotation time with Riise. If they see him as a left sided midfield player, I think bringing in a left back to develop to take over for Riise would be smart, though not necessary in this window. On the right though, we have a problem. Even ignoring the rumors of Riether leaving, there is basically no backup right back. I was hoping Manolev would stay. He's an adequate backup at the position, and can also play on the right in midfield in a 4-3-3 or 4-2-3-1. He would also give the club the option of bringing on Grimmer slowly.

This is where the team is unbelievably thin. In my opinion, I think two more players need to be brought in. I wouldn't mind negotiating with Ajax to see if Enoh can remain with the club. I'm not sure what the Fulham option is, but I think a £1.5-2M price for him is probably fair to both sides. As I've said before; approaching Spurs about buying one of Sigurdsson, Livermore, or Huddlestone might also be smart. I'm not totally positive that Sigurdsson could play in that deeper role and he would be the most expensive of the three, but the £8 bid for James McCarthy does show the team is willing to spend in this area. Finally, it would probably be a good idea to see if Kasami can play in this kind of position. He's talented, but if he doesn't play this year; his time at the club is probably done.

I'm not actually sure much needs to be done here. There are rumors of Frei leaving, which would be sad; but they have the depth to cover it. Also other than Duff, it's a place the team is relatively young. It also seems to be a place the team has a good selection of youth players that may challenge for time soon.

Having Berbatov makes this tricky. You can't bring in someone who expects tons of playing time because Berbatov is already there. You could solve this by moving Berbatov underneath the striker, but then where does Ruiz fit? If you move to a 4-4-2 diamond to get all three playing at once, you can't use all the depth you have at winger. I think the ideal situation is to bring in someone similar to what Rodallega is or what Petric was supposed to be. Either an athletic striker with pace who can also see time on a wing or a poacher/finisher who is good for occasional starts and substitute appearances. Maybe Marcello Trotta is finally ready to be that guy?

I'm actually fairly happy with the team right now. I still think they need a few pieces, but I believe I see the design in what they are trying to build. I'd even be satisfied if just three more first team players were brought in (2 CM's and a RB). Though I could see as many as six more coming in and as many as three more leaving. I only wish things would speed up because sitting around and waiting for things to happen is never fun