Riise Out, Cresswell In At Craven Cottage?

Rumours abound that John Arne Riise is on his way to Werder Bremen to be replaced at Fulham by Ipswich left back Aaron Cresswell.

Share All sharing options for: Riise Out, Cresswell In At Craven Cottage?

The latest set of rumours are that Fulham aren't in for a new striker or creative midfielder but a changing of the guard at left-back.

Last Christmas there were whispers that Riise had fallen out with Martin Jol. Now this summer that dispute may be about to be resolved. Over the last few days word has come from the Associated Press in the U.K. that Riise has told them he was on his way out. The most likely destination seems to be Werder Bremen on a free transfer so Fulham could be free of his reasonably large wages. 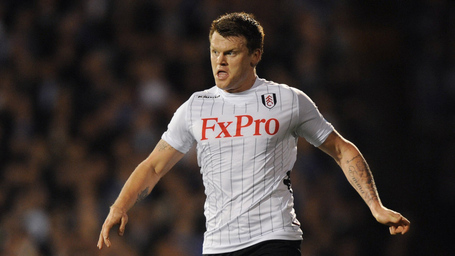 Of course with Matthew Briggs looking like he is on his way to a Championship team on a season-long loan that leaves a hole at left back. Kieran Richardson is a solid performer in the position but his injury record means he cannot be relied on for a whole season.

Then on Monday Archant Norfolk News reported that Fulham had made a £3.7 Million ($5.5 Million) offer for Aaron Cresswell of Ipswich. Cresswell is 23 years old and won the player of the season award at Ipswich after the 2011/12 season. Last season he played every minute of every league game for them and even bagged 4 goals, an impressive return for a defender.

We'll follow these stories over the rest of this summer's transfer window.