How Does Jol Plan to Make These Players Work?

With the Taarabt deal official, and the Bent deal looking more and more likely every second; I've started to think about how all these players might play together. I'm still not sure how it will work, but here are my ideas.

Share All sharing options for: How Does Jol Plan to Make These Players Work?

The problem I see is that Ruiz, Berbatov, and Taarabt all are surprisingly similar players. They aren't exactly the same, but they tend to spend a lot of time in the same areas. Getting them all on the field at once could be difficult, or entail playing one or more of them away from their best position.

Of course one option is to simply not play them all at once. Maybe you simply rotate players and get them all playing time that way. There will inevitably be knocks and injuries (plus Sidwell being Sidwell), and having options will help. Last season all to often it seemed like there were no other options when plan B was called for. Having options will also allow Fulham to keep players fresh throughout the season.

This is something Jol is going to have to figure out. The desire to get your best XI players on the pitch at once is always going to be a strong one, and perhaps he knows how to do it. I'm hardly and expert on strategy, but I do have a few ideas that might work. 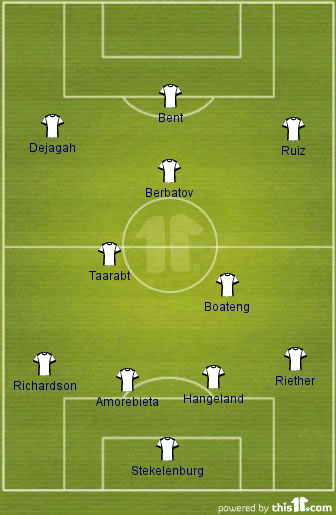 This is either a 4-3-3 or a 4-2-3-1, depending on how you think of Ruiz and Dejagah. This is very attack heavy and puts both Ruiz and Taarabt slightly out of position (although Ruiz excelled as a 4-3-3 winger for FC Twente). Taarabt is going to be more of box to box player with Boateng responsible for staying deeper. This isn't something I've seen Taarabt do before, but it could work (Dembele had never done it before Jol either).

I see problems arising when Riether and/or Richardson move forward in attack. This formation is going to depend heavily on the ability of Tarrabt, Ruiz, Berbatov, and Dejagah to drop back and help defend and to break up quick counters. Only Dejagah and Taarabt really have the pace to do that, and giving too much defensive responsibility to those four might be a recipe for disaster.

There is some flexibility in this formation however. Ruiz could play in Berbatov's spot. Duff and Dejagah can play on either wing. Berbatov could move up top. Kacaniklic can play on the left side. Sidwell and Karagounis can come into either of the deep midfield spots. Taarabt could play behind the striker or on the left wing. And all of that is before we talk about young players that might come in like Chris David or Kasami. It's quite possible to use this formation as the base and make it more defensive or offensive depending on the situation.

Jol actually had some success rolling this formation out at times last year, with Bent replacing Petric and Kacaniklic in place of Taarabt. This biggest problem I see with this is spacing. Berbatov likes to drop back into the space that Ruiz occupies, plus Taarabt likes to cut in and shoot. You could very often see all three players in the same space on the pitch. It's going to take work to get them all on the same page.

You also run into many of the same defensive problems. Taarabt and Dejagah are going to have to be able to defend and Ruiz is going to have to drop back to help. I've been impressed with Boateng so far, but he can't police the whole midfield by himself. This is a formation many of you may not have seen before. It was frequently used by the Seattle Sounders (named for their manager Sigi Schmidt). The one key difference you may see is that it has Berbatov playing on top of Bent. One of the keys to the formation is that the highest forward is not a traditional holding forward. He's responsible for much more playmaking. When the ball is moved through him The wingers and other forward are going to make runs and he needs the vision to lay it off to a winger cutting in, or to a wide player for a cross. The Central midfielder is going to be available for layoffs and long shots, and late runs into the box. Berbatov would need to be able to spot all of that, move into space after laying off the ball, and shoot when he's given space to do that. Vision and technical ability are two things that Berbatov doesn't lack, so he could be great in this role.

Defensively the fullbacks play almost like wing backs with the CDM almost acting as a third full back. They are all free to join the attack, but the key is that one always stays back leaving you three in defense with a fourth ready to come back quickly.

I think this could work, but it's probably the least likely to come about. I don't think Jol is the kind of manager who experiments that much with formations to role out something like this.

Also, it needs to be said that formations are fluid. It's not like the players are going to just stand in the space they are positioned. There will be switching and movement throughout the match. Jol has to figure out a way to get the team to understand their roles and play together no matter how he lines them up.