Cottagers Confidential Staff Picks Our Players of the Year

Voting is still open for you to choose your players of the year. But the staff got together (well, not really together) and put forth our favorites.

Share All sharing options for: Cottagers Confidential Staff Picks Our Players of the Year

Our group of writers were fairly divided on who should win these awards. There is less consensus than you would expect. If you find your self struggling to fill out your ballot, rest assured many of us felt the same way. Perhaps our views can help you make your choices.

Defender of the Year

A strong case could be made for not picking anyone here. Fulham conceded 85 goals this season. That's an absolutely brutal number. Doug Danger though makes the case that no one was the right choice:

I didn't select a DPY because, honestly, I feel a little like it's more accurately the "Least Bad Defensive Player of the Year". I thought Heitinga did well when he came over from Everton, but his body of work wasn't large enough and the goals kept on coming. Stockdale also performed admirably, but again, the goals kept coming. Tough to pick a DPY with a straight face after the club's been relegated, largely due to their generosity at the wrong end of the pitch.

Just saying "no one" isn't as much fun as discussing the players though, and I feel that not all the players should be painted with the same broad brush. There were a few bright spots if you squint. Kieran Richardson was my personal choice. Though, perhaps in hindsight he wasn't the best choice. He stayed healthy for the first time this year, which was big. But a lot of his best performances game when he was an attacking player and his worst performances came as a left back. I'm the first to admit that I can be swayed by goals and assists. In this case, I think I was.

Staff Writer Homi had an interesting choice, and given my love of statistics, I think he as swayed me to his view. He had this to say:

Fernando Amorebieta ended up being my selection after much deliberation. Admittedly this comes with some bias as I just simply couldn't give it to Sidwell. Amorebieta was 4th in Squawka defensive metrics, leader in squad total Clearances, Shots Blocked and Interceptions (CBI) despite the fewest minutes of those in the top-3, and ended up 5th in total duels won. Despite some awkward trouble that did occur, he wasn't overtly terrible. Despite some poor decision making, he was the least bad defender available for selection week in and week out. I really would like to see him stick around as I tend to believe he's a solid option for next season in the Championship.

But even though I'm the manager here, I don't wield power with an iron fist. David Stockdale got the most votes, so David Stockdale is our winner. Michael Stanton summed up his case here:

As we are well aware of by now, our defending was about as far from quality as you could get this season, but one of the shining lights at the back was the resurgence into the first team by David Stockdale. After Stekelenburg managed to lose his starting spot after several crucial errors, Stockdale was thrust into the role and didn’t disappoint. Over the course of the second half of the season, David kept Fulham in many a match, stringing brilliant save after brilliant save. He has shown so much devotion to this club, I could even see him becoming captain of the side next season in the Championship.

Congratulations to David Stockdale. I'll be happy to have him as our keeper going forward, and the class he showed over the last few weeks was wonderful. I wish I had a trophy to give him. 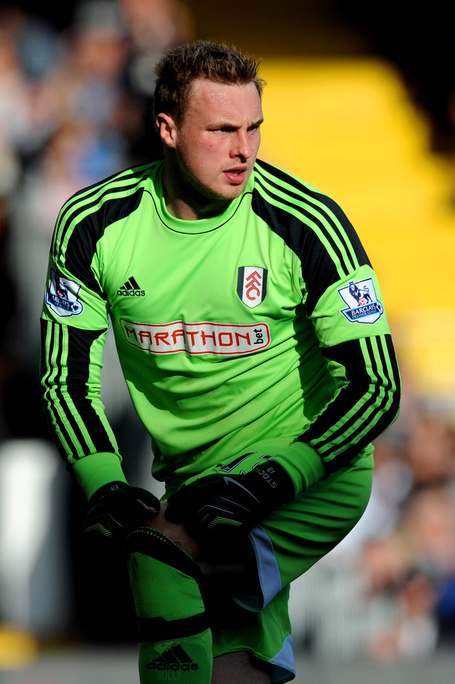 Player of the Year

I truly think there are only three options for this spot. Dejagah, Sidwell and Richardson. While Richardson has had highs, his lows on defense were pretty bad. So that really just leaves Sidwell and Dejagah. Doug Danger makes the case for Sidwell:

My Player of the Year was Steve Sidwell. He was durable, hard-working, and played with pride even when the writing on the wall was pretty clear. Sidwell is not the sort of box-to-box midfielder you pin your survival hopes on, but that's exactly what was asked of him this campaign. Whereas players like Dejagah and Holtby captured the attention of hopeful fans at the end of the season, Sidwell was in the team for epic defeats, sweet victories, and false dawns. He stood up and was counted in almost every formation permutation and managerial change and the club and supporters should be proud of him.

Homi once again gave the statistical angle for picking Dejagah and why he's the pick over Sidwell despite Steve's impressive goal scoring:

I voted Ashkan Dejagah because he was the most dominating presence all season. Second on the club in scoring with 5 total goals through course of two different competitions and 21 total matches, despite playing only 1300 minutes. He averaged a team high of near 3 shots created, which lead the club, through 2 assists, 20 key passes and 22 total shots taken.

Dejagah also tracked back on defense and wasn't a just a pure attacking player with over 2 CBI's per 90 accrued. He won an average of 6 duels match, the same amount as Steve Sidwell, with a higher winning percentage. He was just a full all around player and while he was merely a "super sub" for a relegation side it's really sad that he was merely deployed in this manner when his efforts and results pointed for so much more.

If you can, think back to April 1st, 2013. Fulham have 35 points in 29 games. They are currently leading QPR 3-0 and about to go to 38 points. They are playing at a 1.27 PPM pace. They have only lost two games since the New Year (to Manchester United and Manchester City). Then Dejagah goes down with an injury. QPR almost come back to win. Fulham close out the season with six defeats in eight games, and a .5 PPM pace. I know causation doesn't equal correlation, but I find the way the season ended telling.

Now this season starts and for some reason he's in Jol's doghouse. He only plays in two of the first thirteen matches. When he finally gets back into the squad, they improve (though not by much). When he came back he was often the best player for Fulham. Could he have made a difference? In three early fixtures he didn't play (at Newcastle, West Brom, and Cardiff) Fulham dropped four points. Maybe he makes a difference and the whole season has a different outcome. I don't want to speculate (even though I am), but I feel he was our best player and it was criminal not to use him more. I'm still mad at Jol.

So, congratulations to Ashkan Dejagah who is our Staff Pick for Player of the Year. I'd like to think this honor is enough to keep him around for next season. Unfortunately, I know it's not. 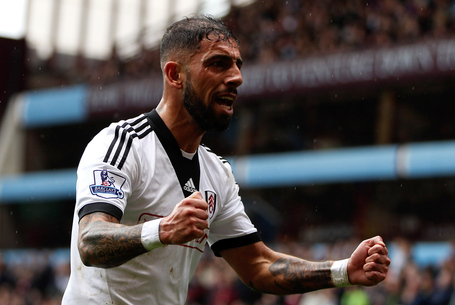 Young Player of the Year

I found this award hard to choose. I didn't see a lot of the youngsters in action. As impressive as our U21 and U18 squads have been, I don't get to see anything but highlights. And you can make just about anyone look good in highlights. That being said, our young players are going to be the key to success in the Championship. Fulham are going to need them if they want to come back up.

My pick was for Dan Burn. I thought he was a solid CB (though I never want to see him play fullback again). I think he will be very good in the Championship and has a chance to develop into a good Premier League defender. I'm not sure he was the best young player this year. But he was the one I saw the most of.

Michael Stanton cast his vote for Patrick Roberts. He's probably the flashiest player and has the highest ceiling. That's a compelling argument in and of itself. Here's what he had to say:

Although young Patrick Roberts barely saw the field for the first team as compared to others, one can’t help but notice his accomplishments for the U18s this season. A player that has also contributed consistently with the under-17 England national team, Roberts should be a factor in the first team next season immediately. His ability on the ball is something that Fulham fans should be head over heels about, and if we are to maintain his services in SW6, he has potential to be a very special player for the Cottagers.

Homi though made the case for the player with the most votes and it's hard to argue:

A bit of an awkward award as Fulham has lean so heavily upon its veteran players in recent years. This season we got a unique opportunity to actually see some of the academy talent. It was none other than Cauley Woodrow how left the biggest impression. If the only reason we remember him is because of the confident take to score his first goal in the final match of the season, that would be enough. But he's endeared himself to supporters with a workmen like effort that was a welcome sight in lieu of all the disappointments with the attacking options featured by the trifecta of managers employed by the West London club on the river Thames.

So Congratulations to Cauley Woodrow for being our Young Player of the Year. Let's hope he has a great season and scores lots of goal in the Championship before a long run in the Premier League with Fulham. 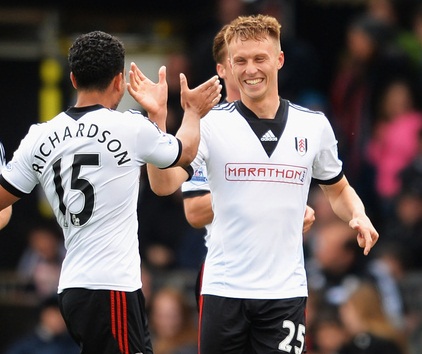 What do you think of our choices? Agree? Disagree? Think we're mental? There's still time to vote for your own players. Be sure to keep coming back when we reveal the results of your picks.