This game is a must win. I know it's been said before, but there's no getting around it. I don't think 35 points will be enough, and Fulham can't make it to 36. If they get to 37 points I believe they'll be safe. That means two wins to stay up. Neither fixture is unwinnable, but Fulham will be the weaker squad in both games.

After the last ten minutes of the Hull City match, I felt like my heart was ripped from my body. I don't think I've ever gone from joy to despair that quickly. If Fulham had held on they'd be in 17th place with a shot of passing Aston Villa and catching West Brom on points this week. Instead, well I don't have to tell you where they are.

Which makes this game the most important game of the year. If they draw, 35 points is the best they can hope for. With Aston Villa already there, and Sunderland capable of picking up six or seven points in their last three fixtures, I don't see how that would be enough. With a loss, they're finished. Only a complete collapse by Sunderland in the last three and a win on the final day for Fulham would keep them up.

So let's talk about Stoke. They're managed by our favorite man Mark Hughes. He promised to bring a prettier, more attractive style of football. Did he? Well there's only so much you can do with the squad he was given. They're middle of the road in goals scored, so at least they are scoring. This season only seven of their goals this year have come off of set pieces, so they aren't as dependent on them as they once were. But there is still a long way to go for them. They are dead last in shots taken per game. They've only successfully launched a single counter attack. They're 14th in shots conceded. They aren't nearly as good as their table position would imply. With a little different luck on both sides (and perhaps an earlier exit from Martin Jol) the positions of the two teams could easily be reversed. I'll let WhoScored sum it up. 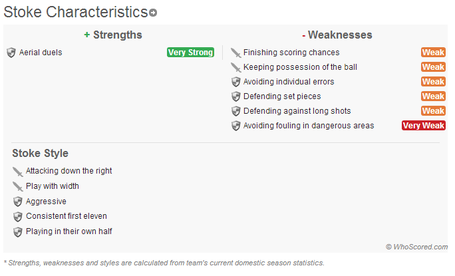 This is a game that Fulham can win. What does Stoke have left to play for? Finishing 10th? Passing New Castle? They're safe, they know it, they can't finish higher than 9th and are unlikely to drop below 11th. A bad team with little to play for against a hungry team that has actually shown some quality in the last few weeks? Other than playing Cardiff, you couldn't ask for much more.

Fulham do have injury concerns. Sidwell has a knock. Diarra and Parker are unlikely to go 90 minutes. Dejagah might not be fully fit. Who knows what to think about Mitroglou.

All that being said, I fully expect Fulham to win. Why do you ask? Because losing this game wouldn't be soul crushing enough. This season has just been soul crushing defeat after soul crushing defeat. And just when you think it might turn around it your heart gets ripped out. I envision Fulham winning this week with West Brom, Sunderland, and Villa all losing. On the final day, Fulham will be ahead of Crystal Palace while Sunderland (35), Villa (35), and West Brom (36) all trail. Then in injury time, Fulham will concede a goal, draw the match, and be relegated. Is there any other end to story which could be more fitting?

As pessimistic as I am, I still want to believe. And as long as their is still hope, I'll still be grasping at it. Even if it's all pulled away from me in the last few minutes of the final day.