Brede Hangeland has been released by Fulham. Reports out of Norway say it was all done over Email. How should we feel about this.

It's not surprise Brede Hangeland was released. He's 32. He had a very poor year. Some reports have him making upwards of £70K/week. He's simply not worth that to a Premier League club, much less a club in the Championship. I don't think many of us expected him to be back at all.

There's also the matter of his captaincy. While he was captain, things fell apart. Factions developed in the locker room. There were players who didn't give their entire effort. You can't put that all on the captain. Most of the blame probably goes to Martin Jol who let that kind of environment fester. But you can't absolve him from blame either. A leader should be working to make sure those kinds of problems don't bubble up.

Still, if reports are to be believed, Fulham didn't handle this very well. Reports out of Norway are saying that Fulham handled the whole thing over email. That may or may not be true. I'd prefer we get both sides of the story before we speculate rampantly, but that's not how the internet works. Already people are assuming the worst. And even our old friend John Arne Riise is weighing in:

The way this has exploded, I doubt we'll ever know the whole story. There could be a legitimate reason it all happened this way. I'd prefer to focus on the good times. He was a Fulham player for six and a half years. Five of those years were very good. But football is a harsh game, and no one can really argue that this wasn't the right decision from a football perspective. Perhaps it could have been handled better (probably on both sides), but it is what it is. Dwelling on the negatives doesn't help anything. I'll live you with Brede's goodbye and let you decide how to think about it yourself. 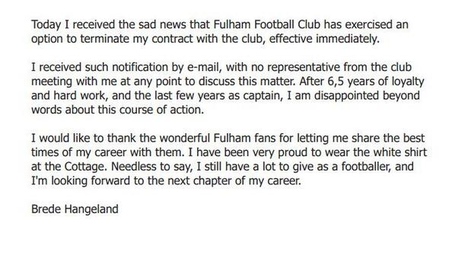 The club has denied that they did anything improper:

The Club would like to clarify that all personal protocol was followed and that Brede Hangeland was notified in the right way.