In summary. Bad. Awful. Think of the worst word you know. That's probably being generous.

Share All sharing options for: Just How Bad Were Fulham's Fullbacks Last Season?

We all know Fulham's defense last year was historically awful. What we don't know is what was the cause. The signs of cracking were there in 2012/13, but everything crumbled last season. Was it the goal keeping? The central defenders? The goal keeping? While none of those things were great, they were probably good enough to keep the team up. What wasn't good enough? The fullbacks. Ted Knuston from StatsBomb is doing a lot of work creating radar graphs that can visually illustrate a players performance. He's recently rolled out graphs for fullbacks. The graphs for John Arne Riise and Sascha Riether are particularly appalling. How appalling? Lets take a look. 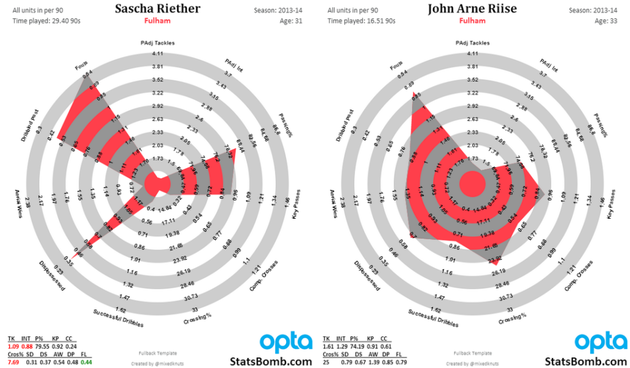 Neither player offered much of anything going forward. Their passing numbers were awful. Which is even worse considering how often they were caught up field. Not much use in running up field to attack when you aren't going to do anything useful.

Of course, a fullback is a defender. You could make up for such poor offensive performance by defending well. Unfortunately for Fulham's season, they didn't do that either. Riether added nothing in interceptions, duels, or tackles. He seemed to only be good at being dribbled past and fouling. How far he fell from his previous good season. If there was one thing that may have lead to Fulham's struggles last year it may just have been the out of the blue decline of Riether. Riise wasn't much better. About as nice to him as you can be is to say that he won a few duels more than Riether and wasn't so easy to dribble past.

Having fullbacks this bad caused a cascading effect to the whole Fulham defense. We constantly saw attackers exploiting out of position center backs and central midfield players. Why were they out of position? They had to cover for god awful full backs. Lets take a look at Steve Sidwell and his graph for comparison. 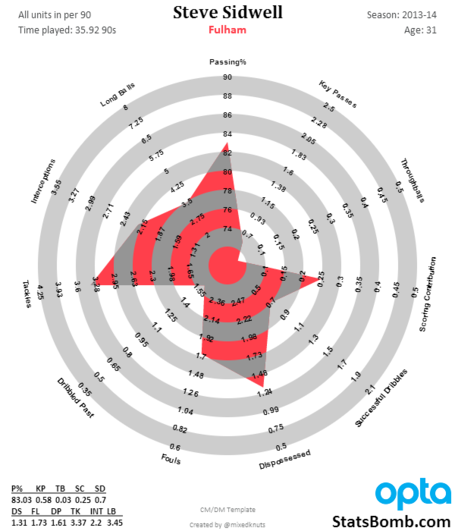 While Sidwell didn't offer much going forward (besides his uncanny ability to score goals somehow). His defensive performance wasn't bad at all. He probably fouled too much, but I believe much of that was due to him struggling to recover for fullbacks that were leaving open spaces.

One question now reigns supreme. Is this going to be fixed for this coming season? You can tell that the team new it was a problem. Of the new signings Tim Hoogland, Kay Voser, Konstantinos Stafylidis, and Shaun Hutchinson can all play full back. Hopefully this improves, or it is going to be another long season.