Despite a rather solid performance the Whites dropped their first chance at points this season at Portman Road.

Share All sharing options for: Cottagers fall to Ipswitch 2-1 in season opener

It's never exciting to loose an opening game. In fact it sucks.

However, losing--in and of itself is bound to happen from time to time. Leicester City pretty much destroyed the Championship last year earning automatic promotion by way of finishing top dog with 102 points. They still lost 6 games last year. That's not to say we should have the expectations of only losing 5 more times the rest of the season. It's probably a good idea not to get too low with the first event of the season. Since there are in fact 45 more just like it. 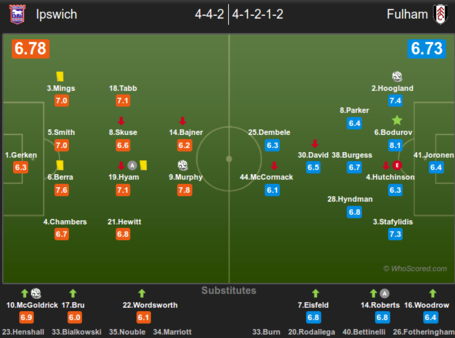 The first line-up surprises of the season was Emerson Hyndman getting the nod out on the left side of the diamond and Cameron Burgess being slotted in a defensive midfield position. I personally would not guessed the line-up configuration though I suppose it wouldn't make you fall out of your chair either. It's more of just a situation of it not being how any of us thought this season would start. Then again never underestimate, Felix Magath.

The first 15 minutes of the match seemed to almost be an omen for the outcome. Despite Fulham retaining the large majority of the ball it was Ipswitch that actually created more chances. However possession often lies and that was such the case in this situation here. Despite holding ownership of the round object it most often was flaunted in the middle and rear portions of the pitch. Which made counter attacking less viable for The Blues but also gave them immediate access to Joronen's goal. 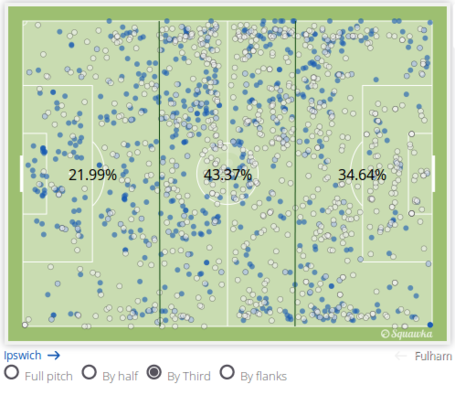 Prior to the first goal by Daryl Murphy the attack stats were rather similar in that each shot had one decent look with a couple of other scattered. Then, following a flurry of shots, Daryl Murphy finished a shot fed by Luke Hyman in the 32nd minute to put Ipswitch Town up one to nihl. A disappointing result to be sure as Fulham had looked confident on the ball but perhaps that confidence was betrayed. As the rest of the half Fulham continued to attempt to play a bit from back as Parker, Hutchinson and Bodurov played long balls to try and ignite the offense (in fact Fulham made 101 long passing attempts for the match). But failed to find much outside of two Chris David shot attempts.

David was sadly subbed off at half with talks of picking up a knock as he was fouled quite heavily (3 recorded times) in the first half. Thomas Eisfeld came on in lieu of the injured CAM and showed off why his transfer sparked supporter grumblings from Holloway. His 39 touches through the match were instrumental in making Fulham look dangerous. Fighting for a comeback in the second half, leading the Whites to 7 created chances by way of his team high 3 key passes (a pass that promptly precedes a shot giving emphasis to the leverage and importance from the said pass).

Unfortunately during the mounting of an attempted come back David McGoldrick right footed shot from the centre of the box found the bottom left corner giving Ipswitch Town a 2 to nothing advantage. Which pushed Fulham into a very fast and fluid over drive mode. The substitution of Pat Roberts provided a further spark where a conceived draw wasn't out of the realm of possibility. 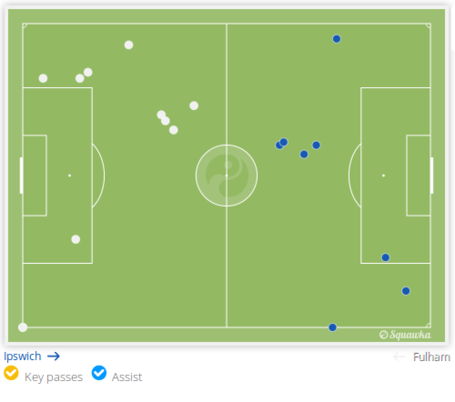 The last 30 minutes Fulham managed to produce 7 of their total 13 shots from the attacking push. Five of which were from inside the box with one shot (poor, Cauley Woodrow) inside the 6 yard box being blocked and cleared away just in time. The lone goal for the Cottagers came by way of a deflection off the foot Tim Hoogland, who had been all over the place off the flank, served by a tidy exchange with Roberts.

The goal felt like the only stroke of luck in a match that seemed to owe Fulham much more at the end of full time. The 90 minutes weren't as kind as perhaps we would have liked but the key take away of having a great first performance and the worries of how the youngsters would performed at least showed in a sample size that they were ready to be called upon

Fulham has Millwall up next at home. Yes, the match has the potential to be a bit of rough and tumble, I would expect them to gather full points. Losing today wasn't delightful but next weeks match is far more important at home than this opener on the road. Play-off positions and automatic promotion bids go to teams that consistently win at home. Not to say losing points is not at all important but you know what I'm saying.